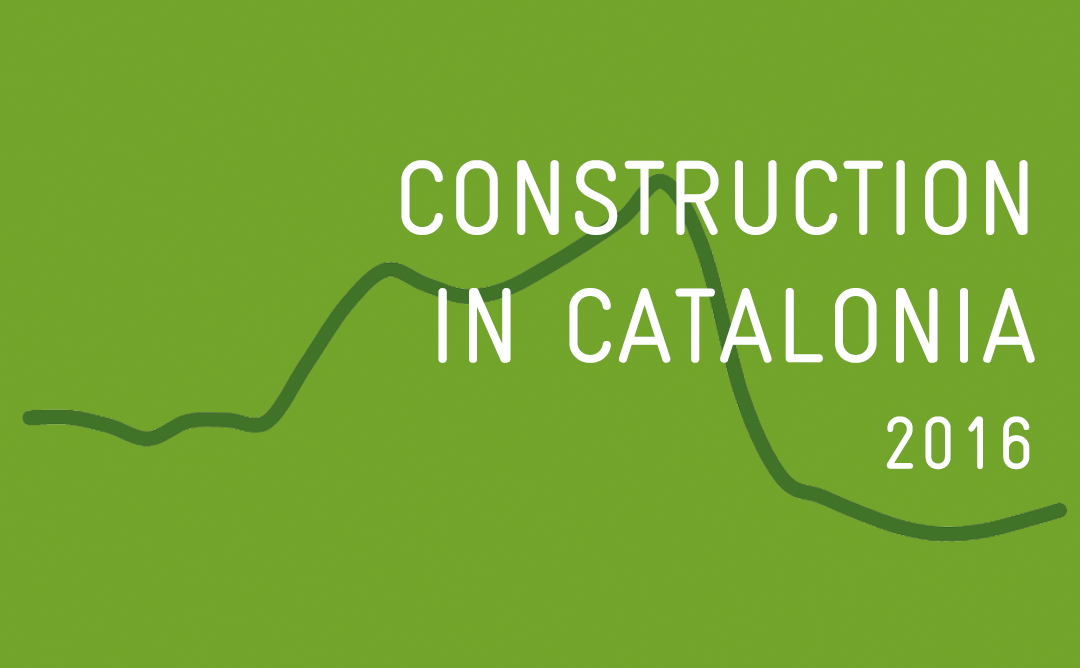 Construction is still in a far from normal situation, without solid structural growth to suggest any imminent improvement

Imatge:
© Col·legi d'Arquitectes de Catalunya (COAC)
In 2016, the increase in the surface area of projects reaching the construction phase has continued, but that growth has been the result of a small number of projects with very large surface areas. Outside of Barcelona, the rest of Catalonia has remained stagnant, with negative growth in some cases. Urban renewal, an essential activity for the future, is not increasing, which is the main problem..

On Thursday, 2 February, at an open meeting with the media, the COAC analysed the construction and renovation activity in Catalonia during 2016, based on projects in the construction phase. The period closed out with 3,579,960 m2 in projects with official authorisation, 24% higher than in 2015. Although the figures may seem positive, the Architects' Association wishes to highlight some considerations:

1.- We are not seeing structural growth: it is not homogeneous across the territory and does not represent a generalised increase in activity (only the large-scale projects stand out).

2.- The figures corresponding to building renovations have shown a disturbing stagnation. The surface area of officially authorised renovation projects has only increased by 100,000 m2 in Catalonia as compared to last year, making up just one-third of the total surface area of authorised projects.

3.- The total surface area of officially authorised projects in 2016 has continued at very low levels, well below the historic minimum for the past 25 years.

4.-The total surface area of authorised projects in Catalonia corresponds to just 7,490 separate projects. If we compare this figure to the total number of Association member architects in Catalonia, nearly 10,000, it clearly demonstrates the extent to which the lack of work makes talk of recovery impossible.


ANALYSIS BY REGION
The province of Barcelona stands out (without taking into account the city of Barcelona), having maintained the growth that began in 2015. Official authorisation was issued for 1,840,613 m2, 36% more than in 2015. We should keep in mind, however, that 34% of this total corresponds to large-scale projects with more than 10,000 m2 of floor area. The city of Barcelona has seen growth of 28%, and nearly 50% of officially authorised projects have been large scale. As for the other provinces, the growth trend of 2015 has been broken: Girona and Lleida have had weak growth, but Tarragona and Ebre have seen negative numbers.

ANALYSIS BY USE
Housing construction has still accounted for more built surface area than non-housing. However, contrary to what happened in 2015, the growth of non-housing has been 28%, whereas the growth of housing has slowed, only increasing by 22% (in 2015 it grew by 42%).

With regard to the number of homes authorised, there were a total of 8,547 authorised during the year which represents an increase of 35% compared to 2015.

ANALYSIS BY TYPE OF BUILDING
In absolute terms, new build is continuing to show the most significant rise (30%), with around 2,303,995 m2 of surface area authorised. The surface area of officially authorised renovation projects has only increased by 100,000 m2 with respect to the previous year.

In that sense, it is clear that urban renewal activities, which are necessary given our old and outdated housing stock, involving interventions directly linked to issues such as energy efficiency and sustainability in all buildings, are not being carried out.

- The sector has not been revitalised; at best it has started down that road, but if structural changes are not implemented, it will take a long time before a minimum level of normality is reached.

-The increase in the surface area of officially authorised projects is concentrated in the province of Barcelona, whereas the situation in the rest of the country remains at a standstill.

- The most troubling aspect is the scant amount of renovation activity taking place throughout the territory.

-The COAC considers urban renewal to be fundamental, on the one hand, in order to respond to citizens’ needs, both now and in the future; and on the other, in order to redress the situation of collapse in the sector and to contribute, to the extent that we can, to the end of the economic crisis. Knowing that 40% of CO2 emissions in Europe are produced by housing, it makes no sense that there should only be five major renovation projects currently taking place in Catalonia.

- There is no culture of renovation in our country. Even in periods prior to the crisis, European data placed Spain at the tail end of Western European countries in that regard. Given this observation, it is clear that neither the (state) law on renovation, urban renewal and urban regeneration, dating from 2013, nor the few grants that have been awarded by regional and local administrations have been effective.

-Consequently, the Architects' Association appeals to those institutions to prioritise urban renewal as a key tool in fighting climate change, in guaranteeing the people’s right to proper and adequate housing, and in ensuring that our cities, buildings and public spaces contribute to the process, to social cohesion and the creation of opportunities.

As such, the Association proposes various actions:

- More subsidies and improvements in funding.
- Simplification and improvement of the regulatory framework.
- More coordination between the administrations and their lines of action.
- Development of a comprehensive vision of the challenges we are taking on.
- An explicit agreement between all participating agents: an Urban Renewal Agreement, which should serve as a tool for consensus in order to successfully tackle this challenge, allowing for sustained action over time with proper planning.