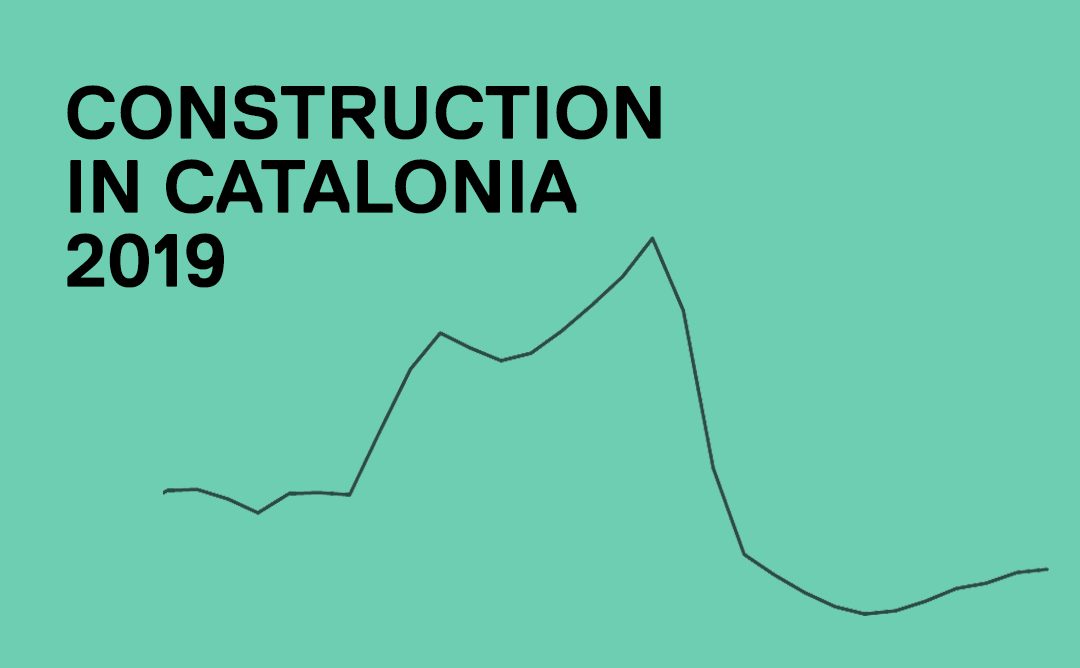 Imatge:
© Col·legi d'Arquitectes de Catalunya (COAC)
The weak growth of approved building space is very far from the figures of the immediately preceding years. The main reason for this is the decline in building projects in the metropolitan area of Barcelona, which has been the driving force behind the timid recovery of the last four years. Once again this year, the building renovation sector is not picking up and the industry is continuing to focus on new build, making the lack of a proper building renovation strategy ever-more serious and with no policies or instruments for its implementation. Housing figures are showing no growth and in Barcelona investors are redirecting their funds towards office projects.

Seventy percent of the residential housing stock in Catalonia was built before 1980—when building regulations and technology were far less evolved than today— which means that there is a clear need for building renovation. This also has an impact on people's health and wellbeing and demonstrates our society's lack of conscience in looking after our habitat.

On Monday 20 January, the COAC called a press conference to analyse the situation of construction and building renovation in Catalonia in 2019 based on a comparison of building project figures between this year and the previous one.

General analysis: main actions and figures
1. The growth in total approved building space is at an all-time low. A total of 4,721,714 m2 have been approved. This growth rate (4.8%) is lower than in 2018 (15%) and underlines the slowdown in construction activity. The analysis matches EUROCONSTRUCT forecasts, which predicted a gradual decline in construction in Spain up to 2022, which might experience zero or even negative growth figures.

2. Any growth is coming from office projects in the Barcelona region and certain industrial projects in Barcelona and Tarragona provinces (though in Tarragona there is also a significant rise in housing developments).

3. The lack of activity in urban building renovation is becoming more and more evident. Growth is concentrated once again on new builds (8.7%). Building renovation has fallen by 7.3% and only accounts for 24% of the total, three points lower than last year.

4. Housing growth has slowed down considerably. Some 15,853 houses were approved, 8.6% more than in 2018, a percentage much lower than in previous years (when growth was around 30-40%). Even so, approvals for housing continue to account for almost 70% of all approved building space.

5. Large-scale projects account for 28% of the total, reflecting similar figures to those for 2018. In 2019, 72 projects of over 10,000 m2 were approved, most of which were in Barcelona province (15 in the capital and the other 45 in the rest of the province, notably the counties of El Barcelonès and El Vallès Occidental).

New build and major renovation projects
Renovations continued to decline, with a drop of 7% in the approved surface area. Housing renovation has pretty much ground to a halt and accounts for just 20% of the total. It is very clear that there is an absence of a building renovation culture as well as the lack of a firm commitment from government to implement urban renewal and building renovation policies.

Residential building space is at a standstill, with an increase of just 0.7%. This again reflects the forecasts by EUROCONSTRUCT, which predicted that the housing sector would be hit hardest, declining until 2022. Whatever the case, in relation to the 15,853 homes approved in 2019, it should be noted that the Catalan Housing Agency estimates that some 26,300 homes will need to be built each year in the 2020-2024 period in order to meet existing demand.

Actions being promoted by the COAC
- Since 2017, we have been collaborating with the Ministry of Territory and Sustainability to develop the future Catalan Agreement on Urban Renewal, based on Catalan Government Agreement 112/2017, the aim being to transform the existing housing stock in line with the criteria of health, wellbeing and energy efficiency. We believe that the Agreement will be a key instrument for the private investment sector (whether businesses or small owner associations) to make a firm commitment to this activity.

- In the context of the climate emergency, we want to contribute our industry’s knowledge towards implementing measures to deal with global warming, and in this respect we are actively involved in initiatives such as the Climate Change Summit, the Catalan Urban Agenda, and Observatory 2030.

- We are encouraging coordination with other agents in the building sector: other trade associations, business groups and government.