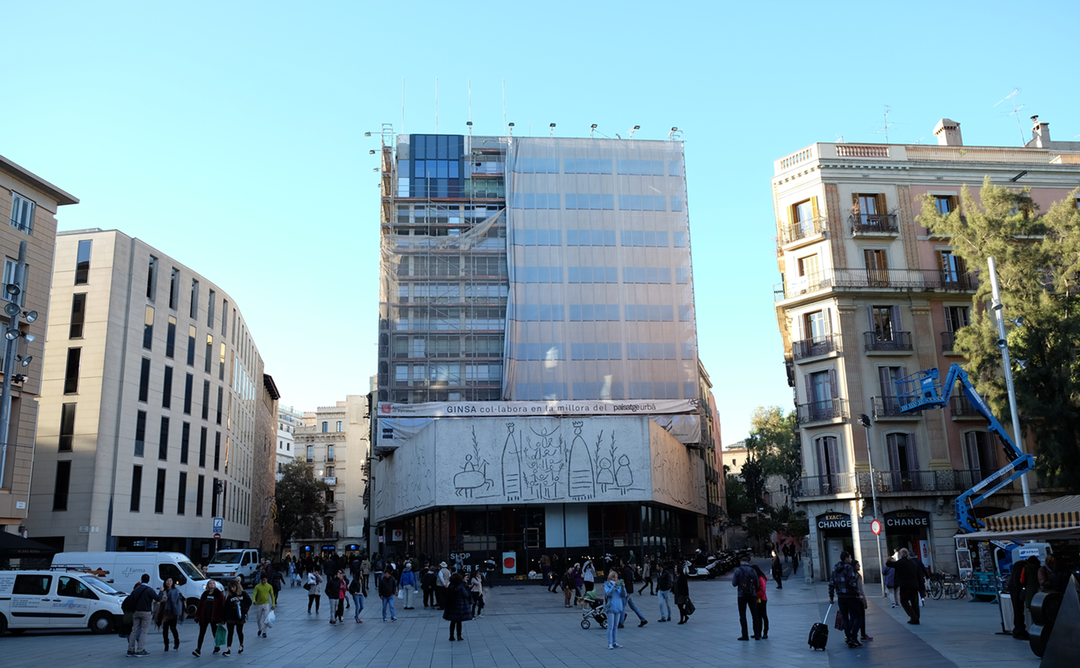 Renovations have begun on the Plaça Nova headquarters

Imatge:
© Col·legi d'Arquitectes de Catalunya (COAC)
The renovations of the facade on the Architects’ Association headquarters in Plaça Nova have begun. Given the significant heritage value of the Association’s headquarters, the intervention is very conscientious, substantially improving the building’s characteristics.

Part of our work as architects is renovation, and this time we’re doing it at home, at the Association headquarters in Barcelona’s Plaça Nova. The building, designed by the architect Xavier Busquets and opened in 1962, is registered as an architectural heritage site, and it is one of the few remaining examples of the so-called 'Modern movement' in Barcelona.

More than 50 years since its construction, the need for improvements was evident in order to keep up with the requirements for a 21st-century building, especially with regard to energy efficiency and environmental parameters, as well as acoustics and sunlight exposure.

In that sense, the winning entry to the competition organized for that purpose—submitted by the team that included the company Fuses-Viader Arquitectes SLP and the architects Jorge Perea and Jordi Mansilla—addresses both the need for restoring the facade and for improving the building’s performance.

An example of urban renewal
At a time when construction and renovation activities in Catalonia are well below the usual levels for Europe and, at the same time, 40% of energy consumption in the European Union can be attributed to buildings—according to the report 'A national perspective on Spain's building sector' drafted by the Rehabilitation Working Group (GTR)—updating and renovating buildings has taken on increasing importance. On the one hand, as a driver for recovery in the construction industry, and, on the other, as an activity intended to improve the existing housing stock in areas such as sustainability, energy efficiency, functionality and utility, and boosting competitiveness. In that sense, renovating the facade not only needs to have an impact in terms of improving of the building’s performance; it also needs to serve as an example to raise collective awareness while promoting debate regarding renovation and continued improvement.

Characteristics of the new facade
The renovations will take place on all 7 floors of the building tower and will involve the following improvements.

In terms of construction, a new building skin will be installed. While preserving the structure’s rhythms and the existing metal profiles, it will provide the building with a substantially improved performance: the sills on the facade will be provided with increased thermal insulation, a laminated glass exterior that incorporates thin photovoltaic cells—highly efficient in the production of energy. The windows will have steel profiles that will break the thermal bridge; they will be especially thin in order to preserve the character of the original facade.

The windows, which will be of the tilt and turn variety to improve natural ventilation to the office spaces, will incorporate low-emissivity glass with an air chamber, ensuring high acoustic performance and thermal insulation in the glass section of the facade, while maintaining transparency from the inside. Direct solar exposure will be controlled using the reflective qualities of the glass, combined with interior blinds with adjustable slats, which will prevent glare and blend in with the colour of the glass.

Energy and environmental efficiency: the new facade incorporates significant changes in terms of energy efficiency. This will reduce the consumption of thermal energy—for heating and cooling—and electric and gas power with the idea that, in the future, when the rest of the building has been renovated, the energy costs will be reduced by at least 91% compared to current levels.

The project will be part of a European project which, within the framework of the Horizon 2020 programme, under the title “Integrated Decision Support for Early Steps of NZEB Renovations” (EarlyNZEB), will study methodologies and provide support during exemplary energy rehabilitation projects. As part of the Horizon 2020 project, through the facade renovation, the COAC is included in the Grow Smarter initiative, intended to reduce the environmental effects of rapid urbanization in cities and to provide a smarter way of responding to the needs of residents with regard to questions such as energy (low energy districts), infrastructures (IT) and transportation (mobility) through the development of various interventions.

Sustainability: The facade’s new capacity for generating electricity will provide for a certain amount of self-generation to be consumed by the building itself, which could amount to as much as 8.8% of the electricity needed by the building after the intervention is completed. As for CO2 emissions, the savings in building life cycle emissions will add up to a total of 8 metric tonnes.