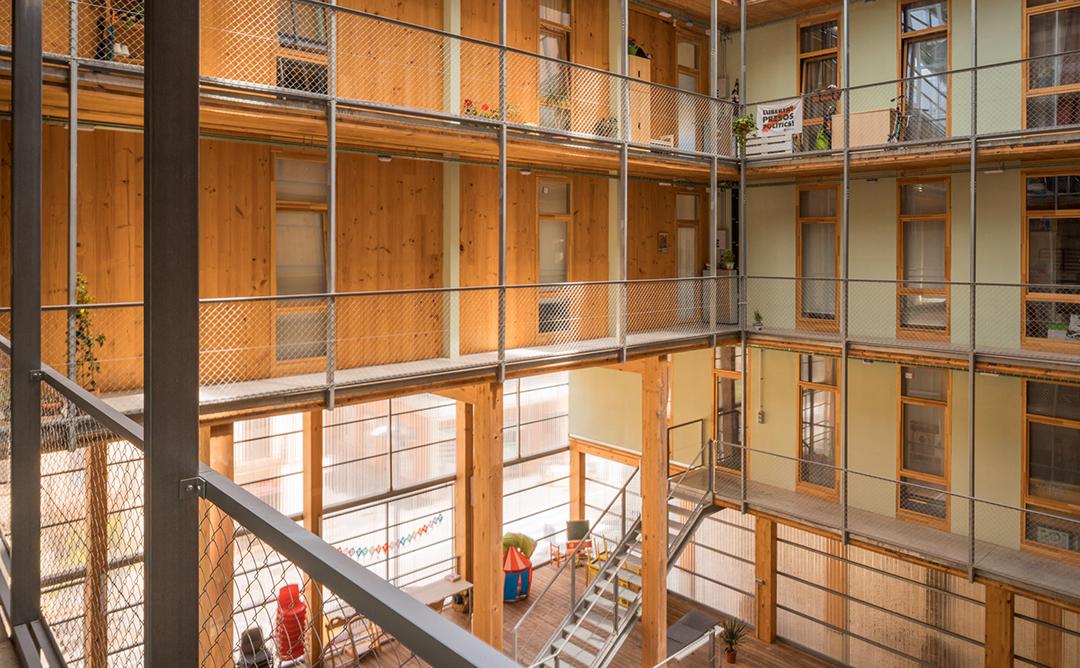 THE LACOL COOPERATIVE, WINNERS OF THE 2022 EUMIES AWARD FOR EMERGING ARCHITECTURE

The project selected as the Architecture Prize winner of the 2022 European Union Prize for Contemporary Architecture – Mies van der Rohe Award itself was Town House - Kingston University in London, developed by the Irish studio Grafton Architects, founded by Yvonne Farrell and Shelley McNamara.

La Borda – cooperative housing
The La Borda cooperative housing project is a self-organised development providing access to decent, non-speculative housing that focuses on the importance of its use through a collective management structure. The project was originally conceived in 2012, as part of the process involved in the regeneration of the Can Batlló industrial complex and the residential and cooperative fabric of the Sants district.

The building is constructed on a plot of land on Carrer Constitució provided by the City Council. The project consists of 28 housing units (40, 60 and 75 m2) and community spaces arranged around a central courtyard, with the aim of promoting community and neighbourhood life.

The Award’s Jury was keen to highlight, “the importance of architecture that delves into the possibility of changing mindsets and policies and the relevance of inclusiveness.”

The awards ceremony will take place on 12 May, as part of EUmies Awards Day. The full programme can be found on the Mies van der Rohe Foundation website.

Lacol
Made up of 14 members, Lacol is an architects’ cooperative which was set up in the Sants district of Barcelona in 2009.The La Borda project has already been recognised with an award at the 3rd Barcelona Architecture Exhibition, as well as being selected as the winner of the City of Barcelona Architecture and Urbanism Prize in 2019. The studio, together with Equal Saree, was also selected for an AJAC XII Award for their “La Model opens up to the city” participatory process, in addition to which Lacol’s female partners were awarded the 2021 Moira Gemmill Prize for Emerging Architecture as part of the W Awards.

Further information on Lacol’s work can be found on the arquitecturacatalana.cat website.