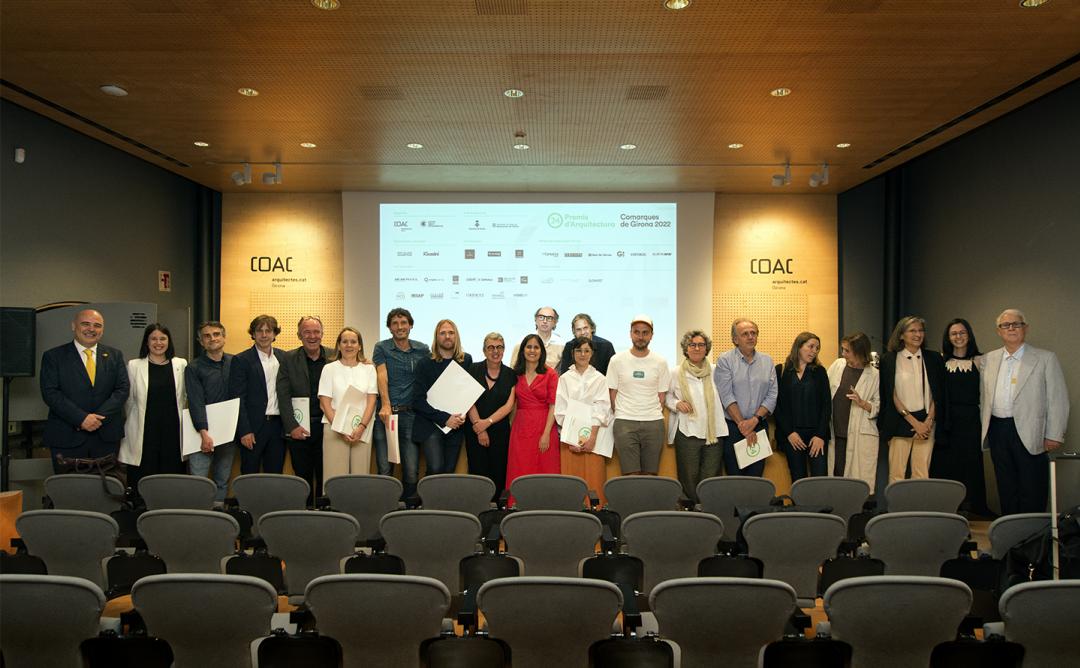 On 27 May, the Girona regional branch of the Architects’ Association of Catalonia hosted the awards ceremony for the 24th Architectural Awards of the Counties of Girona, one of the province’s most prestigious cultural events in the field of architecture and construction.

The event, now back to its traditional format after two years online, was presided over by Sílvia Musquera, member of the COAC Cultural Committee for the Girona branch. Over the course of the evening, awards were presented to 16 prize-winning projects: 15 selected by the jury in the categories of Architecture, Interiors, Landscapes and Temporary Structures, plus the Opinion Award, decided by the public voting for their favourite from the 119 project entries.

The jury, made up of architects Isabela de Rentería, acting as president, and board representatives Montse Nogués and Marta Benedicto, highlighted the close links the selected projects established with the relevant locations and local residents and their synchronicity with sustainability criteria, not only as something supplementary to the architecture, but as a fundamental premise and guiding principle.

ARCHITECTURE
The award for Architecture went to 6x6 block in Girona by BOSCH.CAPDEFERRO.ARQUITECTURA. The jury also singled out the following three housing projects for a special mention: Casa Cadaqués , by Arquitectura G; Casa Ter in Rupià, by MESURA; and Casa Palau in Girona, by Àlex Sibils Ensesa. Lastly, the Casa Nus in Olot project by Arnau Estudi d'Arquitectura was also recognised with a mention.

BUILDING RENOVATIONS
The New Crematorium in Girona by Plasencia Arquitectura was selected as the prize-winning project in this category, with The House of Tomorrow in Olot by Arnau Estudi d'Arquitectura also receiving a special mention. The jury further decided to recognise Rehabilitation of a building in the old quarter of Girona project by Àlex Sibils Ensesa with a mention.

INTERIORS
This award went to Housing in the Can Descals factory in Olot by Estudio Além, with two mentions also going to: An interior in Girona by Camps Felip Arquitecturia, and Altarpieces in Cornellà del Terri by BOSCH.CAPDEFERRO.ARQUITECTURA.

TEMPORARY STRUCTURES
The prize-winning project in this category went to Fontada in Olot by unparelldarquitectes + Xevi Rodeja and Clàudia Calvet, with a mention also for 'Habitare' or Homeless in Olot by Bayona Studio.

OPINION AWARD
In addition to the projects selected by the professional jury, the 2022 Opinion Award was also presented, which this year went to House in Palau (Girona) by Àlex Sibils Ensesa. More than 5,000 people visited the premisarquitecturagirona.cat website to view the 119 project entries and vote for their favourite.