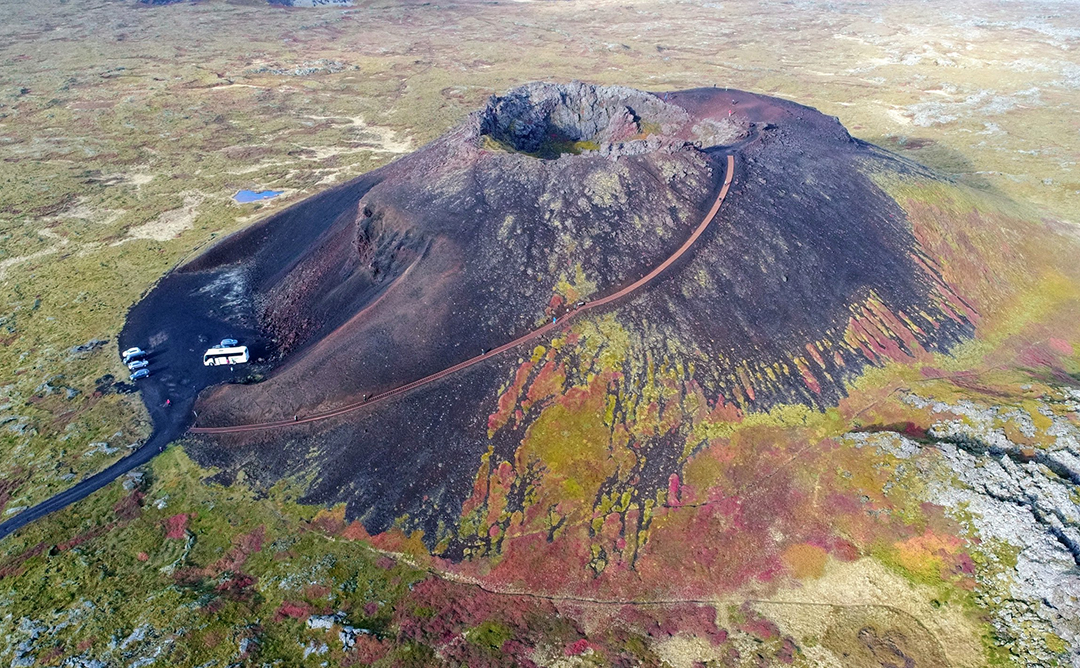 Imatge:
© Landlag
The intervention, which was built at the Saxhóll volcano (Iceland) to address the impact of the visitors who climb the crater every day, was undertaken by the Landslag ehf architectural practice and architect Þráinn Hauksson and has won the 10th Rosa Barba International Landscape Award. The jury also gave a special mention to the Linear Park project for the Cuernavaca railway. The award was presented on Friday, 28 September, at a ceremony held in the small palace of the Palau de la Música.

Reducing the damage caused by visitors
The 45-metre-high Saxhóll volcano rises out of the moss-covered lava fields of the National Park of Snæfellsjökull in Iceland. The hill is a popular destination as it provides excellent views of the endless lava field, the Atlantic Ocean in the distance and the picturesque Snæfellsjökull glacier. The walk to the top of Saxhóll follows a path that has been laid down over the years by its visitors. The increase in visitor numbers in the last few years has started to make itself felt: the slopes and vegetation of the hillsides have started to become damaged and the path to the top has branched off into winding parallel tracks. For this reason, in 2014 it was decided to take action to prevent any further damage to the landscape.

The stairway to heaven and hell
The team at Landslag ehf and architect Þráinn Hauksson designed a black steel stairway that follows the route of the original path. The project was completed in 2016 and the black steel quickly oxidized to blend in with the reddish shades of the volcanic crater and the Arctic/Alpine vegetation. The end result has proved very popular with visitors, who often refer to the route social media as the 'stairway to heaven'.

The project was selected for three awards in 2017: the Nordic Architecture Fair Award in Gothenfurt, the Island Design Awards, and the DV Reykjavík Cultural Awards in Iceland.

For further information please visit the website of the International Biennial of Landscape Architecture.